– Opening on Thursday 2 (Private View), 6 – 10pm with a performance by Percussionist James Larter

The exhibition brings back ‘touch’ which has been tabooed and sterilised recently with the pandemic. While our touch has been scrutinised and recorded, touch-screen devices became windows for human interaction. Some people were in touch with nature, finding respite from the sudden halting of normal life, some had to suffer in the proximity of others and some were alone, devoid of touch. The exhibition began with thoughts of revitalising the joie de vivre, much needed after repeated lockdowns, but it inevitably brought the memory of our recent loss and heightened perception. The different iterations of touch are revealed through this exhibition, Touch. Audiences are open to closeness, pressure, warmth, memories and pain if they are willing, or open to be touched.

While not being naively optimistic, the exhibition encourages touches to reflect and celebrate. Some works are contemplative while being playful; the exhibition curator Stephanie Seungmin Kim wanted to work with artists she admires and who encapsulate the exhibition’s spirit. The exhibition will present celebrated work from South Korea mixing mediums and senses from artists working in the UK . 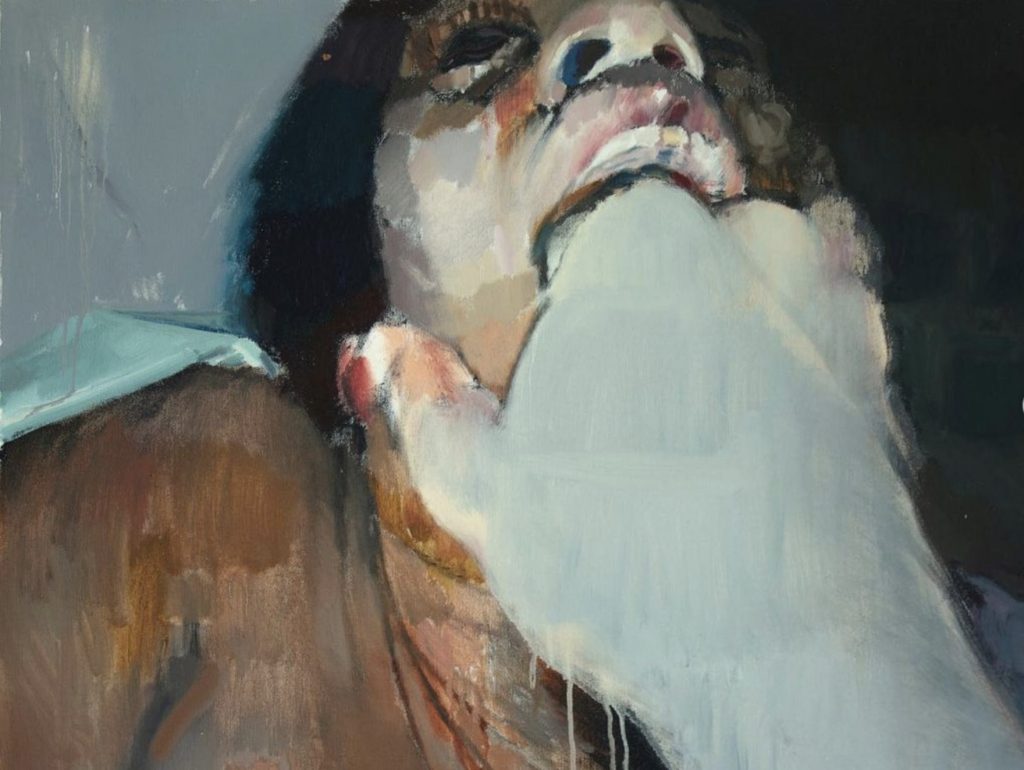 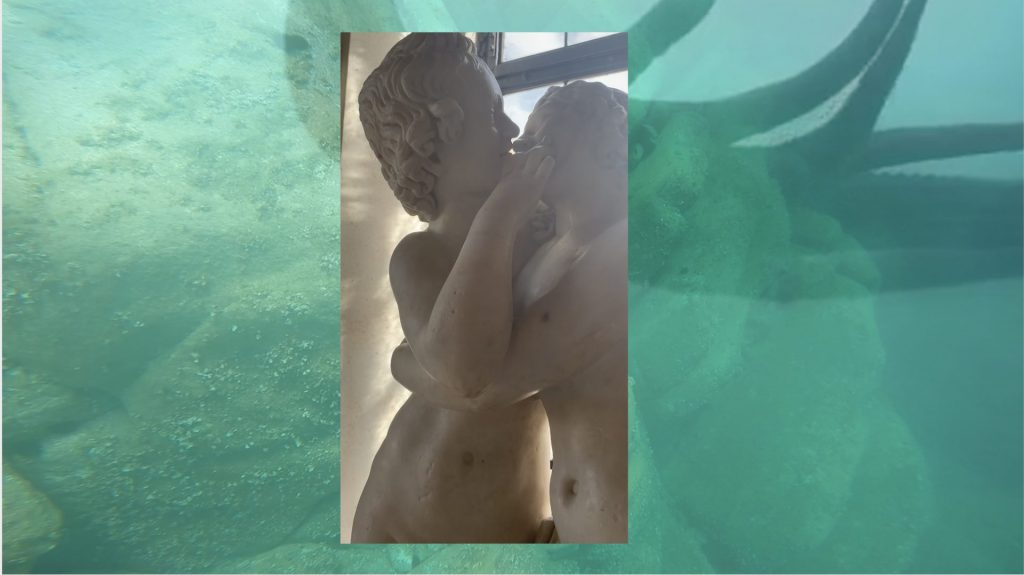 Vakki, Touch by by by Touch, Size Variable, installation, 2021 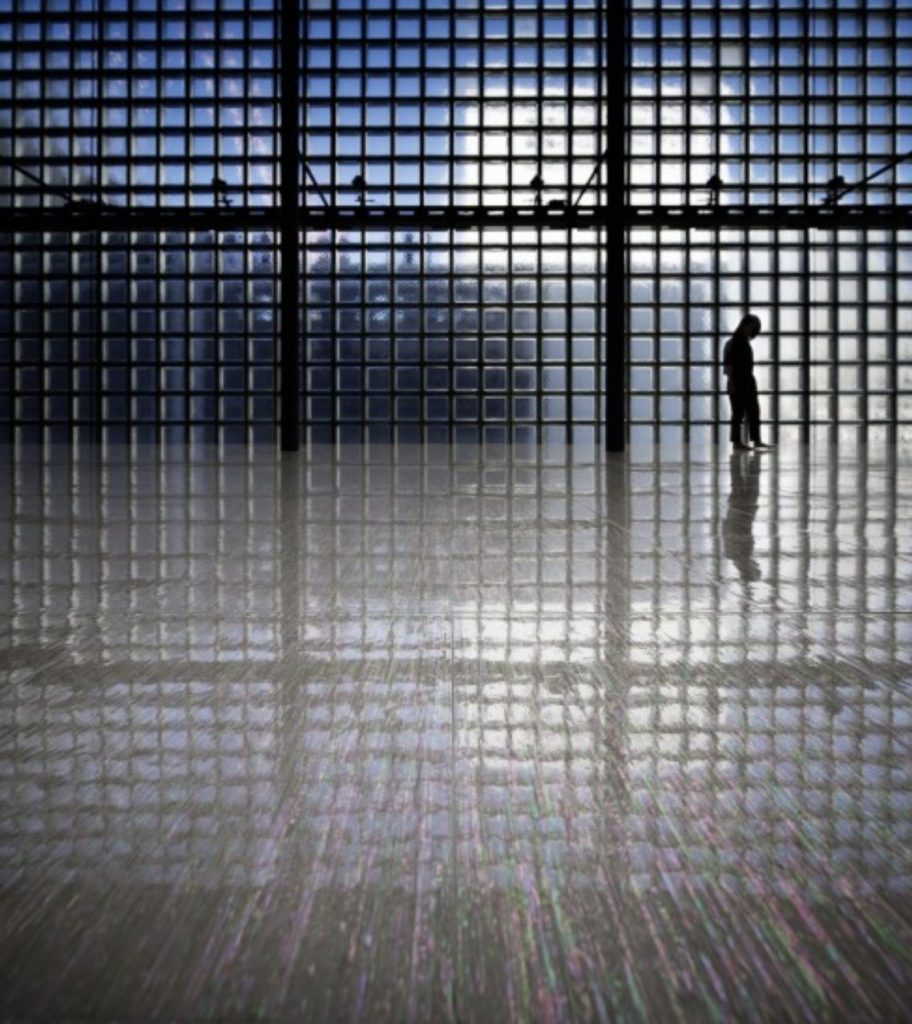 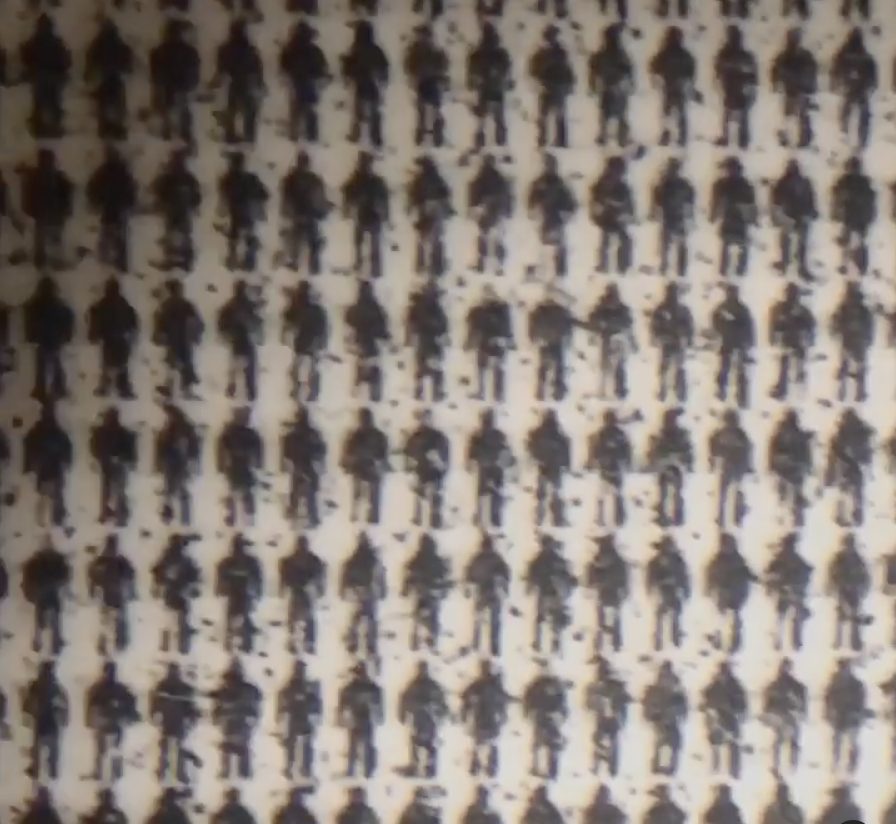 João Villas, Despina, New work to be produced for Touch, 2021 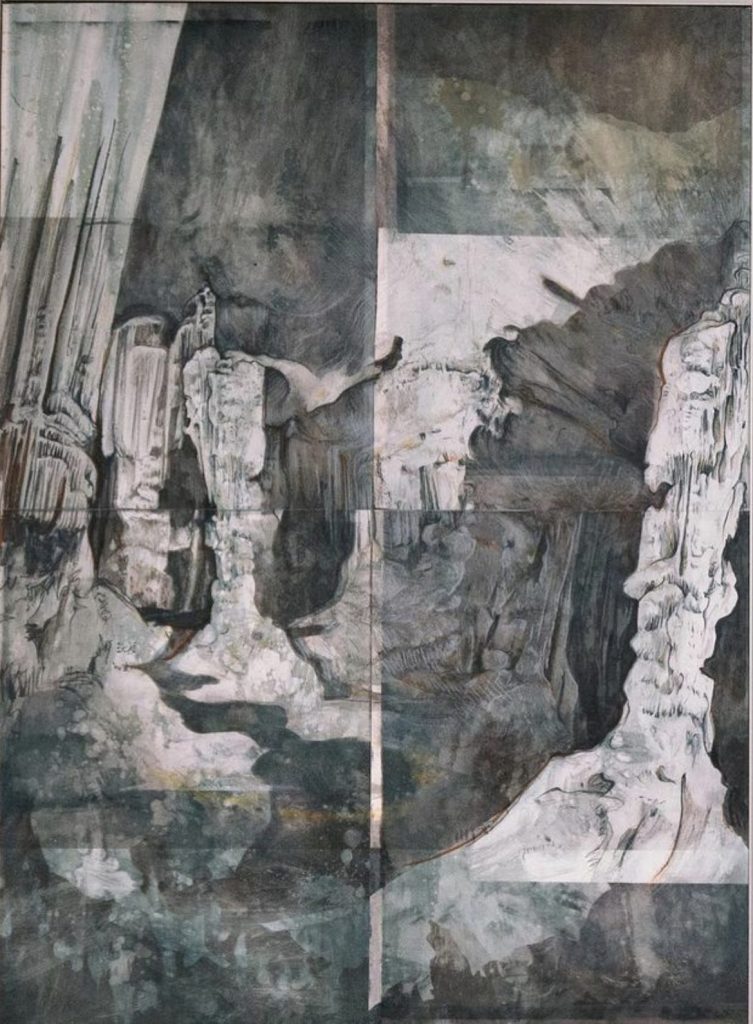 Kristina Chan, Between Our Seas, 1 of 5, 5 meter panoramic lithograph with monoprinting, 2016. 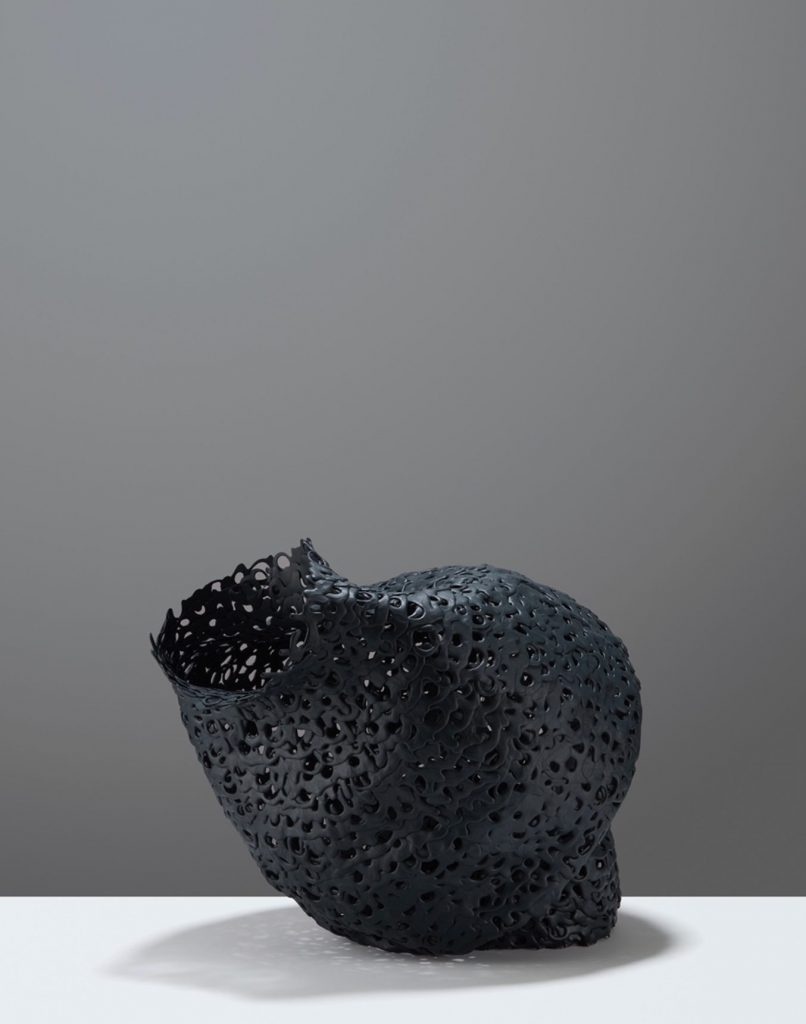 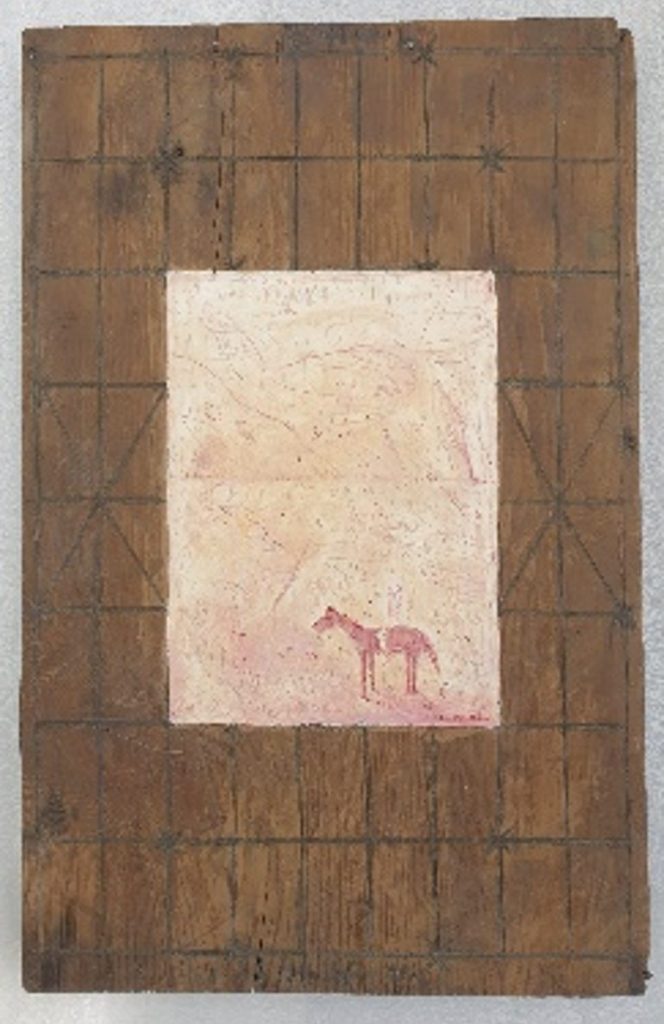 Koh Sangwoo’s Evolution is part of a series that has taken animals in danger of extinction. The colours of the Gorilla with hearts around the eyes looks surreal, yet the softness of the fur has such intense details, making one believe in its existence. Even though it started as a photograph, it was inverted into a painting and each brushstroke is applied with utmost attention to detail. Painting one eye took many days, tells Koh, “so it does not dissolve into pixels even if one enlarges it to a billboard’s size”. The softness of touch of the living makes it apparent that the living is breathing. It reminds us how, as the breathing disappears, the softness goes away.

The spectrum of touch also involves entering a new terrain of time and space. Axel Void has grown up in Spain, and worked in Berlin, now in Miami. Somehow the intense colours recall classical painting and drawing while he mixes it with street graffiti tradition, summoning the mix of cultures he is in touch with. The Love series has the pain of being close to someone, the intensity of emotion, which is flanked by the portrait of his personal family.

Zoë Marden’s new body of work titled, Tonguing is an exploration of the fleshy muscular organ in the mouth which of late has been obscured by a mask. For Touch, Zoë has created an installation using materials synonymous with the erotic and the carnal. Latex curtains invite you into a space to have an encounter with the intimate. Her drawings are in homage to iconic kisses of popular culture from the slow salivated instructional kissing session between Sarah Michelle Geller and Selma Blaire to the Ghostly kiss between Demi Moore and Patrick Swayze. Her multi-media installations construct a landscape of desire and connection that we have been yearning for over the past year.

Vakki has colours that dance, kinetic sculptures that speak, and cushions that audiences can sit on. Starting from the graphic images, her work transcends into interactive media, space, and sound. She questions cycles and translates the surrounding into her own visual language. With Touch, Vakki’s work is again touched down into a different sphere, attempting to half-occupy a room

Ligyung has devoted her career to experimenting with various styles based on the peculiarity of non-material, especially light. But when Quantum physics tells us that our touch is not actually touching per-se but atoms pushing the negative forces away, Ligyung seems to reverse this, making light into a physical substance. Entirely made out from natural mother of pearl, carefully picked and intensely worked into thin stripes, the work glows and shines away with natural sunlight. The substance has natural light emanating and one remembers being touched by light after darkness.

New commissioned work by Mimi Joung moulds each word, Girl with a Lantern. The writing brings synesthesia. Joung had been working on her Watermelon Sugar series, turning this short novel into a sculpture in ceramics.  ‘The girl with the lantern’ describes the beginning of a relationship, and she elaborates on how Brautigan describes the feelings here, “Perhaps you stared into a river. There was somebody near you who loved you. They were about to touch you. You could feel this before it happened. Then it happened. That is my name.” Joung is trying new lantern/moon colour, and the shapes will only be determined after firing, and it is the touch of the fire that brings the physical change, like how the story evolves unexpectedly after two hands touch.

With Hayoung Kim, the world transcends into a cacophony of colours while speaking of modern technology and science – how they affect the human mind. Like the game characters, animated figures and characters seem to entwine, intermingle and disintegrate. Kim touches on the creation of vulnerable and fragile feelings, in this cold/rational/big-game-like world.

The exhibition also plays with the many reiterations of the printing process as the traditional way of touching knowledge and disseminating it. Unlike the digital multiplication of reels and the finite set of possible values digital signals have, printing allowed carefully planned multiplication but with intricate differences and character and the process inspired many new avant-garde movements. João Villas and Kristina Chan are artists who also have founded Plaintiff Press, to create print editions for themselves and for other artists. João Villas’s lithograph shows what appears as ‘dots’, but audiences come closer and touch a “looking in device” the depth of detail is revealed and they see humans on a micro-scale. One has to be in touch with others to be “response-able”.

Kristina Chan’s cave is reconstructed in Gallery 46 to describe the feeling of the endless journeys that have been stopped during the pandemic. Using various reiterations of the prints, the installation in prints will be adding another layer to the exhibition. Between our Seas describes a stillness felt as the nation lies in wait, unsure of what the future holds. The work itself depicts the Cango Caves, one of the largest cave networks in Africa and the world.

Hanuk Jung works with materiality, approaching patterns in life while reexamining the world that seems to be entangled and complex. The narrative told by Jung is called Colourscape, followed by each work named after chapters of Carl Sagan’s Cosmos. For Touch, Jung created two new works Colourscape- the Harmony of the World, and Colorscape-The Shores of the Cosmic Ocean. They are the translation of the perception Jung gained from Cosmos. For a physicist, touch is an electromagnetic interaction, and for Hanuk, the act of painting is also a form of theorising, finding patterns, in touch with surroundings.

Lee Sang Yong has been carving on collected materials he collected, crafting them with his  ‘touch’ meticulously creating works that play on space and time. Lee had carved on hundreds of inkstones. Inkstone is one of the ‘Four Precious Things of the Study according to Eastern Confucianism, and have been dug out from a mountain, used by scholars for all their lives. Grinding them, and preparing stories on them means ‘fate’ for Lee. Since the pandemic, Lee has begun painting on collected ancient wooden panels and abandoned woodblocks he previously had collected while travelling the coastline of Korea. Their weathering from the elements over their long life makes them almost as strong as a rock. He then smooths them down, making flat surfaces before adding multiple layers of paints and drawings to make each a symphony of time and touch.

The last room celebrates the launching of Ssketch, a K-cosmetic gel nail empowering and supporting artists. The first edition has twelve muses. Ssketch is all about rediscovering touch through our fingertips, collaboration and artistic endeavour. The wall is covered with photographs by two artists, Heo Dongwook and Cosimo. Jihyun’s Where are the glasses? print series, produced in collaboration with Plaintiff Press and Stephanie S Kim, the curator of the show will fill the room.

From visual entanglement to the synesthetic force of perceiving-feeling, and from Quantum physics to feminist theory, Touch celebrates multisensory, multinational and mutligender arousal and responses.

The curator adds that there will be a performance by award-winning Percussionist James Larter on the opening on 2nd September 2021.

Stephanie Seungmin Kim PhD. is a curator, filmmaker and producer based in London and across Asia and Europe. She is the director of Iskai Contemporary Art (iskaiart.com) and Sleepers Summit (sleeperssummit.com), which have hosted major international government-affiliated exhibitions commemorating national and international diplomacy and culture. She has also art directed the film Sleepers in Venice film and the ost album. One of the most extensive exhibitions was Jikji, the Golden Seed, the title exhibition of the 1st Jikji Korea International Festival, featuring 40 artists that attracted 40,000 people over eight days. She has a long-standing interest in ecology producing exhibitions such as Earth Alert: Photographic Responses to Climate Change (2009), Project Seoul Apparel, as a part of Seoul Biennale of Architecture and Urbanism (2017), a special exhibition marking United Nations Convention to Combat Desertification (UNCCD,) COP13 in Inner Mongolia (2017, Ordos)and hosted Bellong Bellong Now festival, Jeju Island (2020), consisting of a conference, artists residency, exhibitions, publishing, and architectural projects focusing on sustainability. Since 2005, she has directed over 90 international exhibitions, with around 500 artists in 22 cities. Collections include Sleepers in Venice (2015, Venice), Singapore Open Media Festival (2015, Singapore), Unesco Heritage, Legacy & Light (2014, Paris), A Soldier’s Tale (2013, London), Crystallize : New Media Art Lab UK for Presidential State Visit London (2013, Old Billingsgate), Liverpool Biennial City-States Terra Galaxia (2012, Liverpool)  Asia Media Landscape (2010, Liverpool), Heritage and (UNESCO, Paris) and more. Stephanie was the founding curator of the Korean Cultural Centre UK in London from 2007 to 2011. In 2004, Stephanie gained her PhD in Curatting Contemporary Art from Royal College of Art,  Masters in the History of Art from the University College London and, in 2003, a BA (Hons) in Fine and Decorative Arts at Sotheby’s Institute.

Percussionist and multi-instrumentalist James Larter has always been obsessed with rhythm; whether it be the roaring sound of Brazilian Samba or the intricate and hypnotic drums from the African diaspora, music that makes people move is a passion. He is an in-demand session musician, soloist and composer and has played with a staggering variety of groups and artists from Sampha to the London Philharmonic Orchestra. The recipient of Awards and scholarships such as the English Speaking Union Scholarship, James Peterscak Scholarship and a New York Philharmonic Grant, James studied at The Royal Academy of Music in London and the Manhattan School of Music in New York. He was also a fellow at the Music Academy of the West in Santa Barbara, California. His recent compositions for Percussion and Electronics are published on Bachovich Publications in the U.S.

Gelnail designed by artists, and one gallery will be filled with stories behind the launch, and photographs and illustrations by Dongwuk Heo,  Jihyun Yu and Cosimo Sturniolo.

SSKETCH Is an artist led nail design brand bringing original creations from artists’ fingertips to yours. It is a combination of the intricate technology of Korean cosmetics and vision of strong, artistic and professional women, creating a new nail art culture. K-Beauty Volume Gel Nail Strips Power at the tips of your fingers, empowering artists and women.