Present from the Past 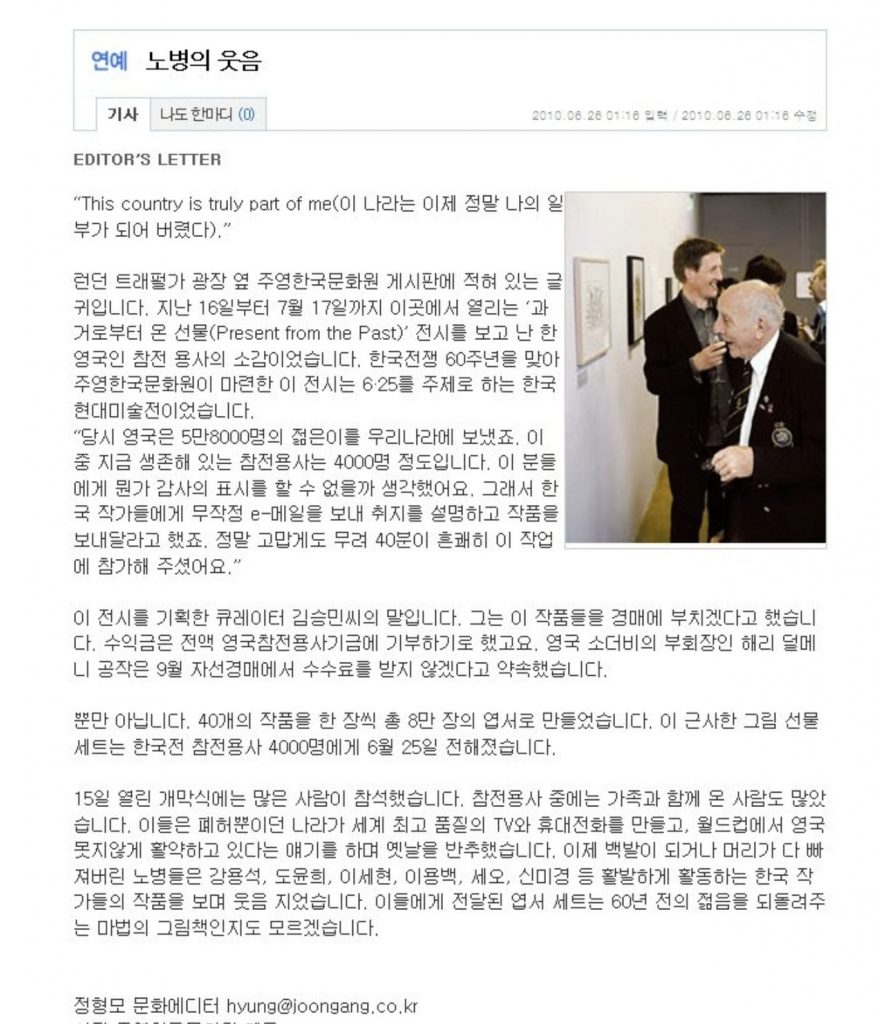 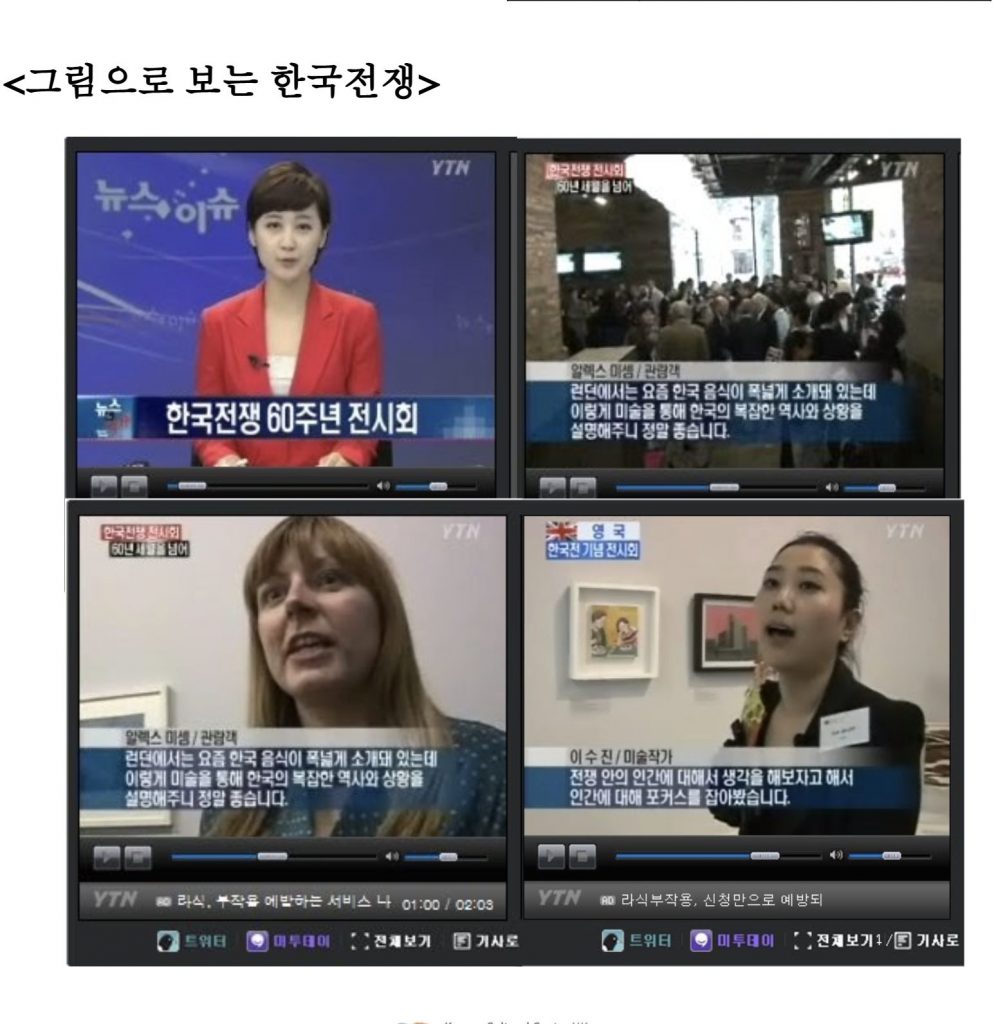 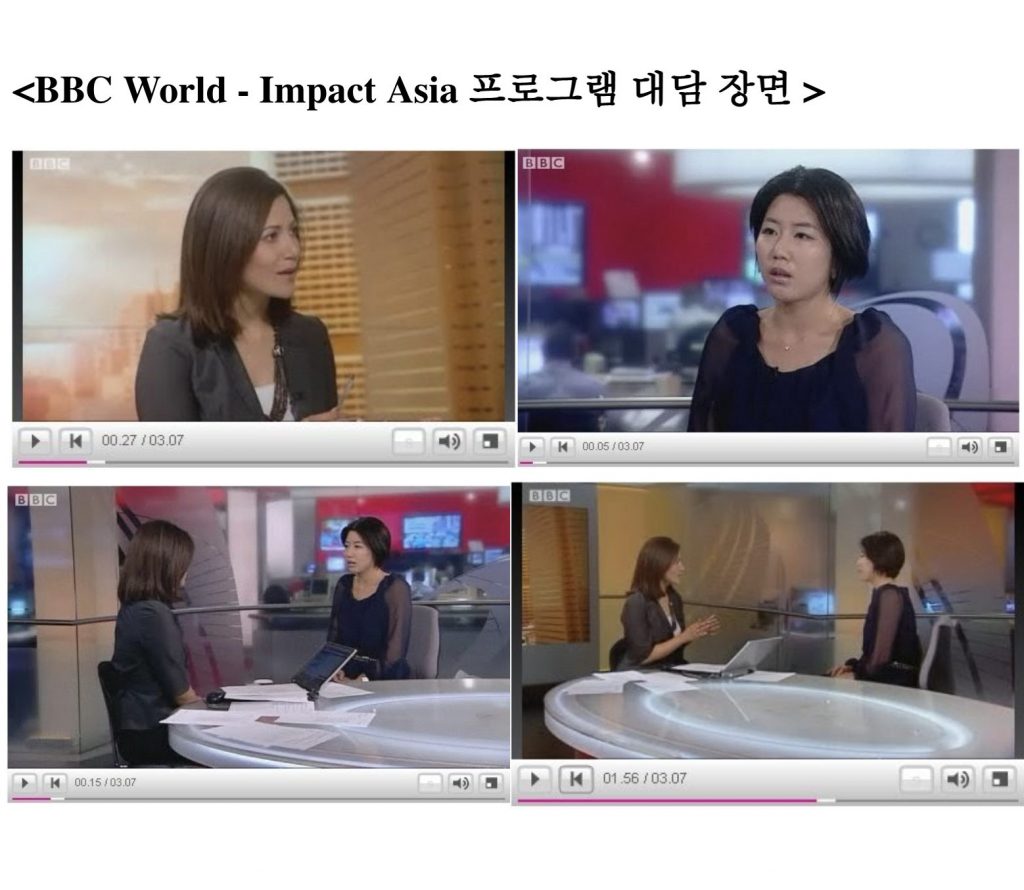 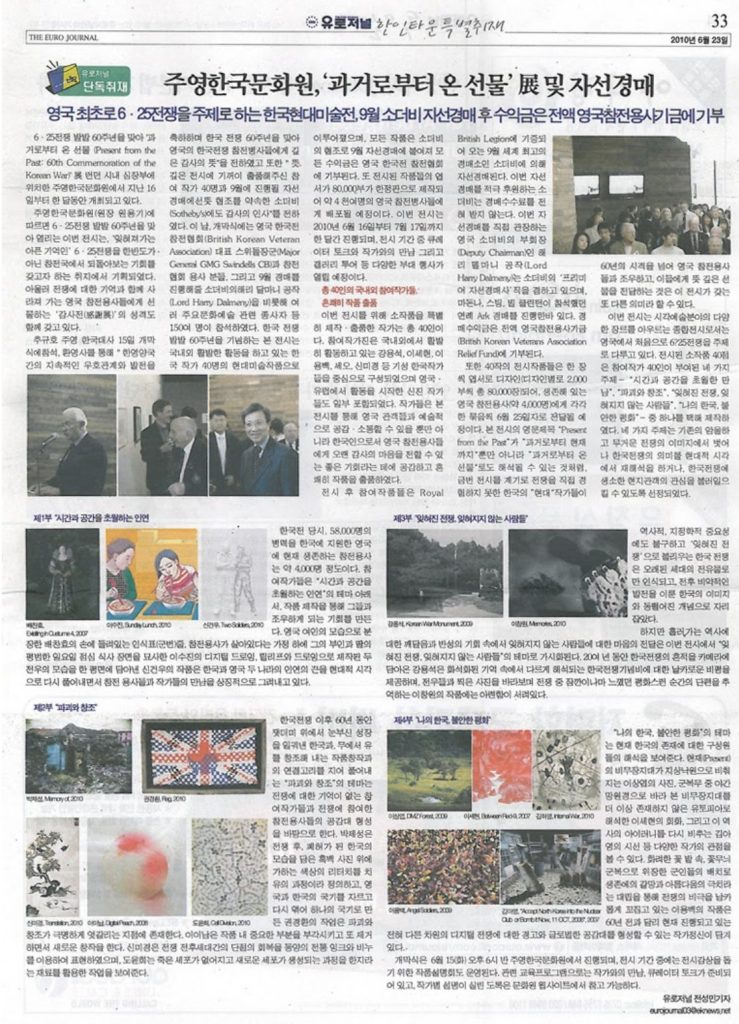 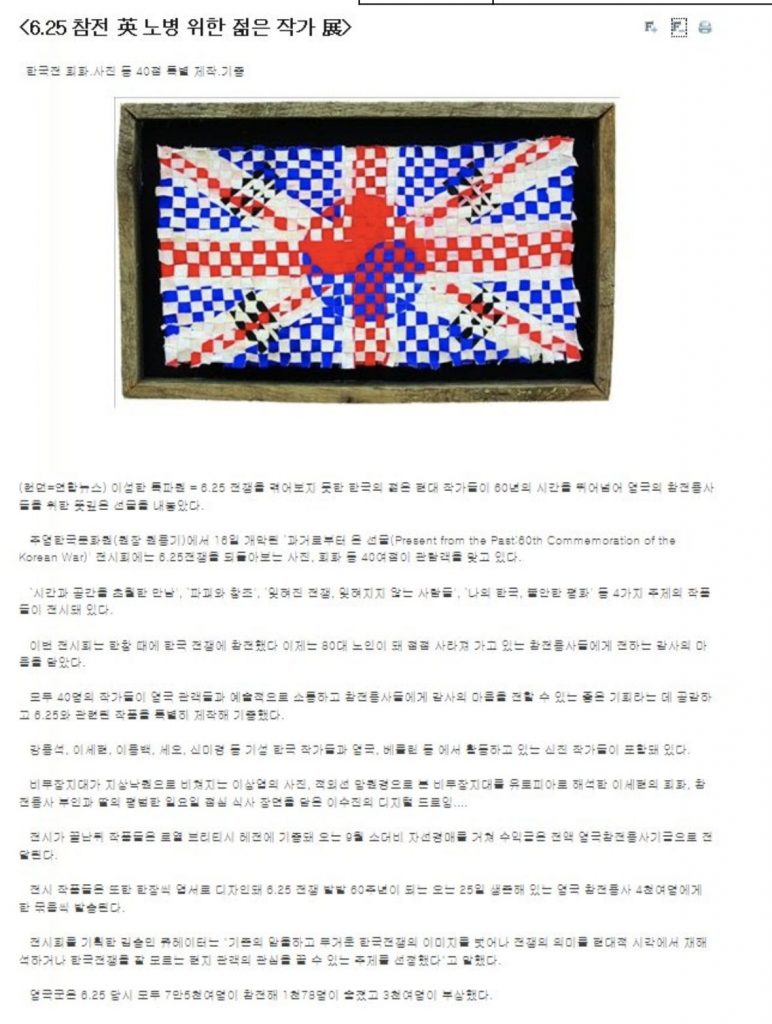 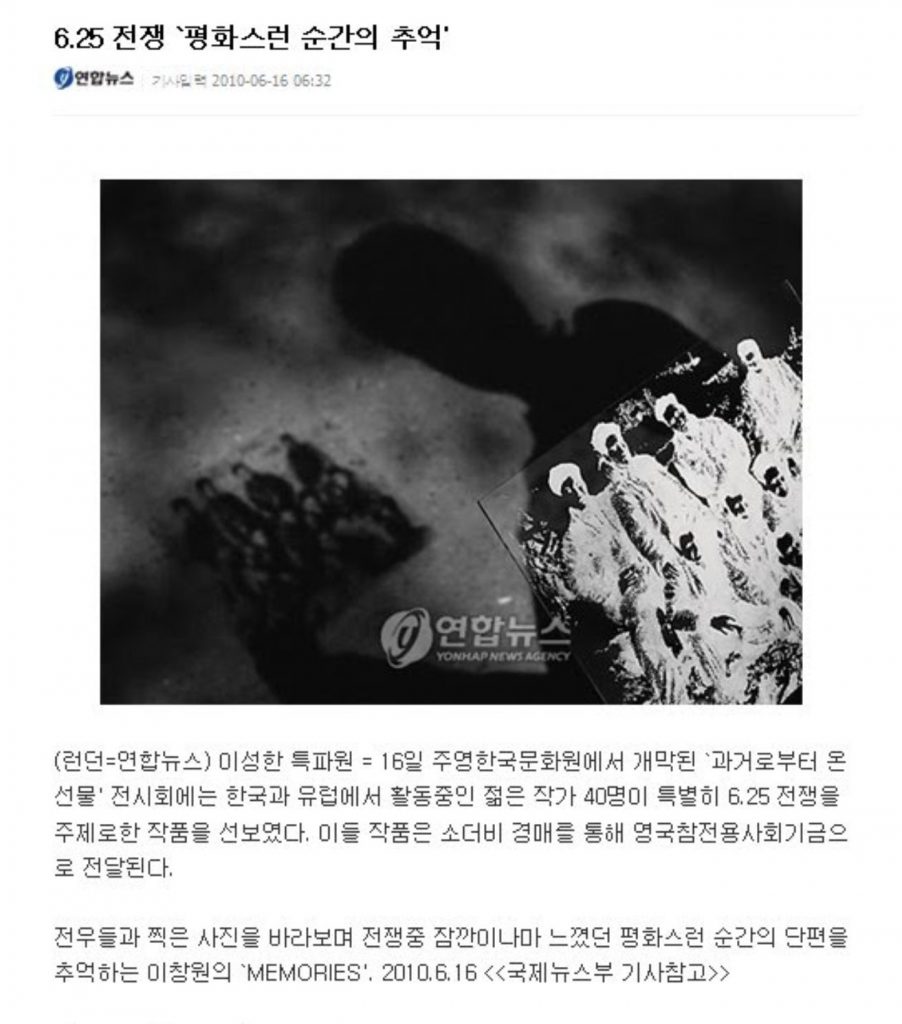 Koreans refer to the Korean War simply as ‘Yugio’ or ‘625’; so devastating was the aftermath of that June day in 1950 that it has been branded on the national psyche ever since.  The War was a destructive domestic conflict that marked a turning point in modern world history, as the first proxy Cold War stand-off. Most importantly, it is still unresolved and despite its historical and geopolitical significance it has become regarded as the “Forgotten War.”

With the exception of a resilient but ageing generation that survived the war and weathered gruelling poverty and wounding ideological divide thereafter, most of us remember the war through black-and-white flickering TV images. More than any previous year, the Korean War bears special significance this June with its 60th anniversary. Commemoration in the UK is also special: the British lost more troops in Korea than in the Falklands and both Gulf Wars combined;  it is this sacrifice that we remember.

In Confucian tradition, sixty years of age – or ‘hwangap’ in Korean – marks a blissful occasion where one reaches his or her birth cycle and maturity. It is thus also a commiserative ‘hwangap’ for the Korean War. As times have changed, so have viewpoints. These artists, all born after that War, have been part of sixty years of prosperity and relative stability; from ashes to a jungle of skyscrapers, they themselves represent Korea’s dramatic change. A British veteran of the Korean War and holder of the Victoria Cross, Bill Speakman, explains: “What I see in Korea today is unbelievable. It is very impressive …I believe that it was worth my coming here in 1951.”

The themes of the exhibition are not only confined to issues that relate directly to the Korean War. Forty artists were commissioned to produce an art work using one of the four suggested themes; these were designed to provide creative opportunities and focal points to offer a better understanding of the conflict. The following four themes become the window to the main set of discourses: the viewpoint from the Present (“Present” from the Past).

To begin with, the exhibition is an attempt to establish a dialogue between artists and veterans like Bill. Thus the first theme, “Connections that Transcend Time and Space”, is inspired by how cause and consequences affect individuals who have never met. Imagine a soldier who used to carry postcards from his loved ones, close to his heart. He is a young soldier who had never been to Korea until he was fighting in the trenches on the opposite side of the world. Fast forward sixty years, this soldier has never freed himself from memories of Korea and one day receives a present from Korean artists. Thus the theme of the exhibition questions the nature of human life: “Present” from the Past.

When Gunwoo SHIN portrays two soldiers – one a relief sculpture and the second a drawing — they are standing side-by-side ‘together, now and forever. BAE Chan-Hyo continues this theme with his challenging piece ‘Existing in Costume’. BAE, a UK-based Korean artist, discussing the connections that transcend time and space writes, how it was the estrangement and cultural difference that prompted him to dress as an unidentifiable British woman. KANG Yongsuk has been collecting traces of the Korean War for the past twenty-five years and affectionately refreshes the perspective from different angles. KANG sees some of the Korean War monuments as oppressive, fossilising the past for people. The combination of an elderly lady and a monument in one photograph transfers the artist’s critical thought to the viewer.

The second topic is “Destruction and Creation”. Post-Korean War artists have lived through speedy development and democratisation; it is only natural that Korean artists can often be sceptical of the universal idea of peace and war. Yet no one is free to live without his or her shadow. ‘Did the peace we enjoy result directly from the Korean War?’ Considering this question, these artists have chosen to scrutinize it through fundamental differences in Creation (the Act of making Art) versus Destruction (the War). KWON Kyung-hwan uses the technique of weaving pieces of torn national flags from the UK and Korea. The cutting represents the wounds of the war whereas the weaving expresses the idea of healing. Je BAAK emphasises the sense of irony by colouring an old black and white photograph of a destroyed and battered landscape taken during the Korean War. For BAAK, the transformation of the image is a form of healing.

The third subject is “Forgotten War, Unforgettable People”. LEE Changwon painted an image of soldiers, Korean and foreign together, on glass. The glass becomes negative, transforming the shadow back on the ground. OH Jung Geun remembers his father, who also served in Korea. He was lucky enough to survive the war but spent his subsequent life suffering from his experiences there. Inspired by his walks around the Jewish Museum in Berlin, OH’s poignant dedication is to his father and all Korean veterans. For NA Hyun, her work relates to the theme of Unforgettable People, her search for information about seven French soldiers who were reported missing during the Korean War.

The last theme is “My Korea and its Fragile Peace”. Korea’s ‘Fragile Peace’ casts a shadow over every Korean on the peninsula. Whether it is war monuments, the Joint Security Area and the Demilitarized Zone (DMZ) or the barbed wire, the Korean War still continues. For every new generation in the South, emotionally the conflict moves just a bit further away, so everyday life continues on what has effectively now become an island nation. Yet still, the shadow remains. LEE Seahyun’s ‘Between Red’ series has been influenced by his military service when he surveyed the border through ultra-red night vision equipment. LEE saw serenity in the landscape and paints it as he believes it no longer exists. With a sense of pride, LEE Sang Youp’s photography captures the immensely peaceful natural habitat and wildlife in the DMZ. In contrast, PARK Jongwoo’s barbed wires reveal the contradictions of this peaceful fragility. A 38th Parallel is a place of desolation, anger and tension, but for the animals and birds that have made this their home, the tranquillity is heaven on earth.

This sentiment is prevalent throughout Korea and is expressed in genuine ways with LEE Yongbaek’s Angel Soldier. Images of camouflaged and armed soldiers in flower-patterned military uniforms blend into the rich mosaic of colourful fake flowers. The simulacrum shows that the soldier does not have an independent existence but only exists as a part of an environment. The issue extends to war in this digital age.

There are works that express the reworking of the past. Often, the ‘625’ broke all tradition and rebuilt. Traditional concepts have been lost because of the sheer destruction. SHIN Meekyung reworks a painting by LEE Am (1499 – ?) by using soap. Soap’s versatile texture is transformed into the appearance of traditional paper. The patina of that time, with its blots, blemishes and fading, carries a narrative from the past into the context of today. By exploring this, SHIN fills the generational and cultural gaps between us and the veterans with its peaceful and heart-warming scenery.

This exhibition was prompted by an exhibition held at the Museum of Modern Art in New York entitled “Korea : Impact of War on Photographs” in 1951, in the middle of the Korean War. The exhibition was a part of cultural propaganda to align the US public with a dominant ideology. The Present from the Past will re-evaluate what the Korean War meant for Koreans at the time and for later generations.