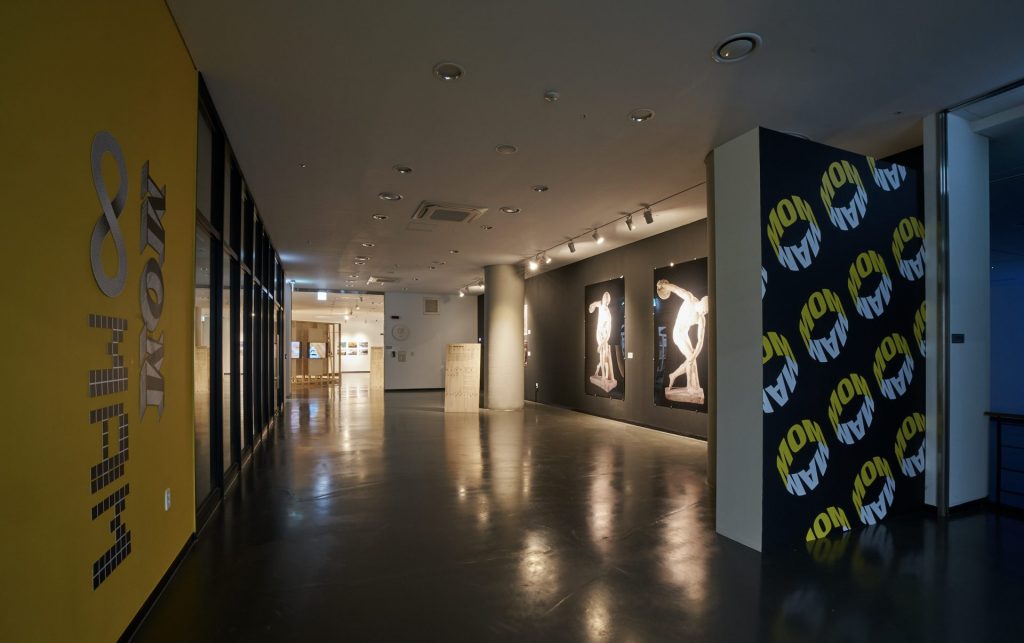 An entrance to mommam exhibition 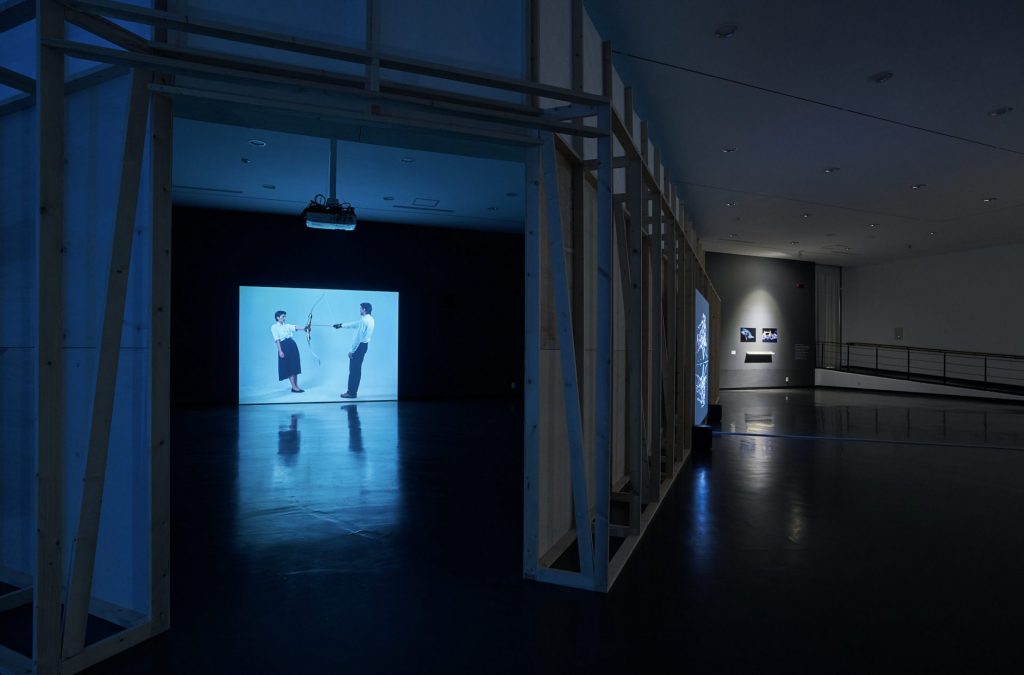 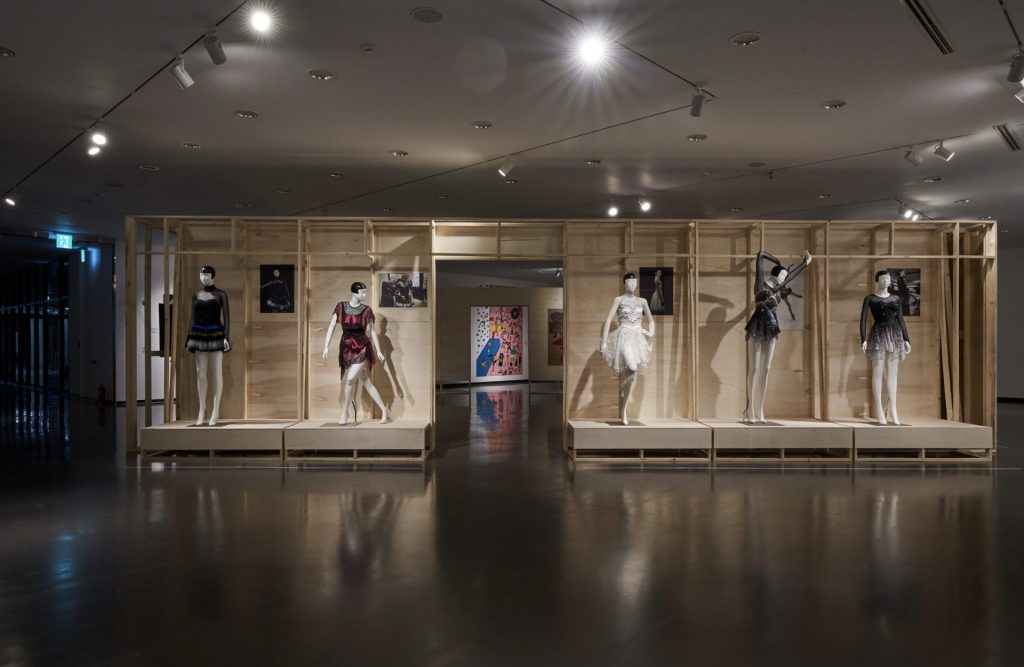 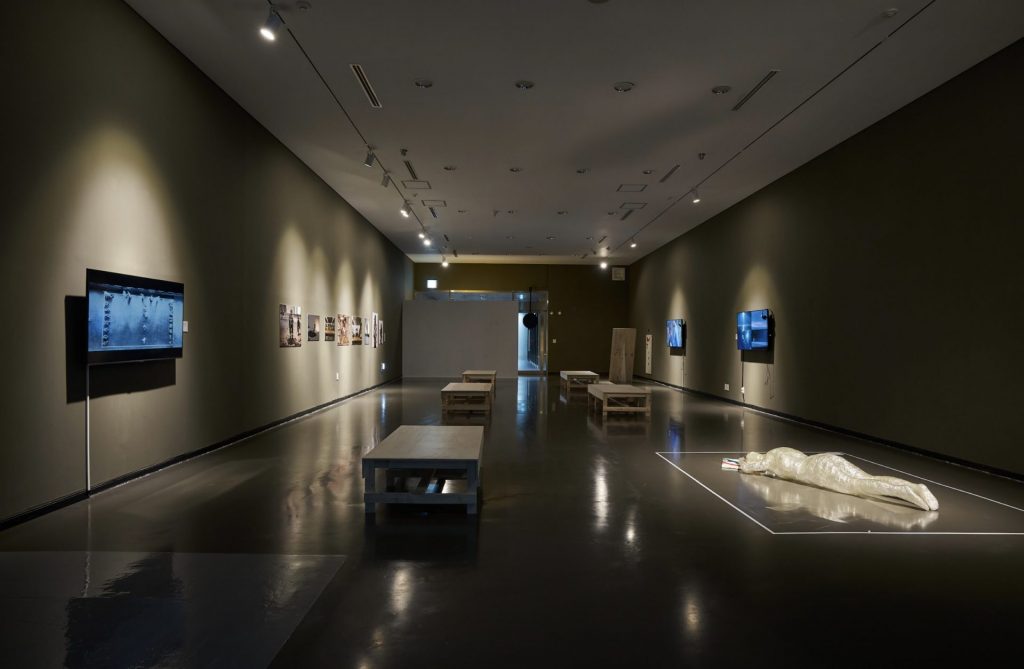 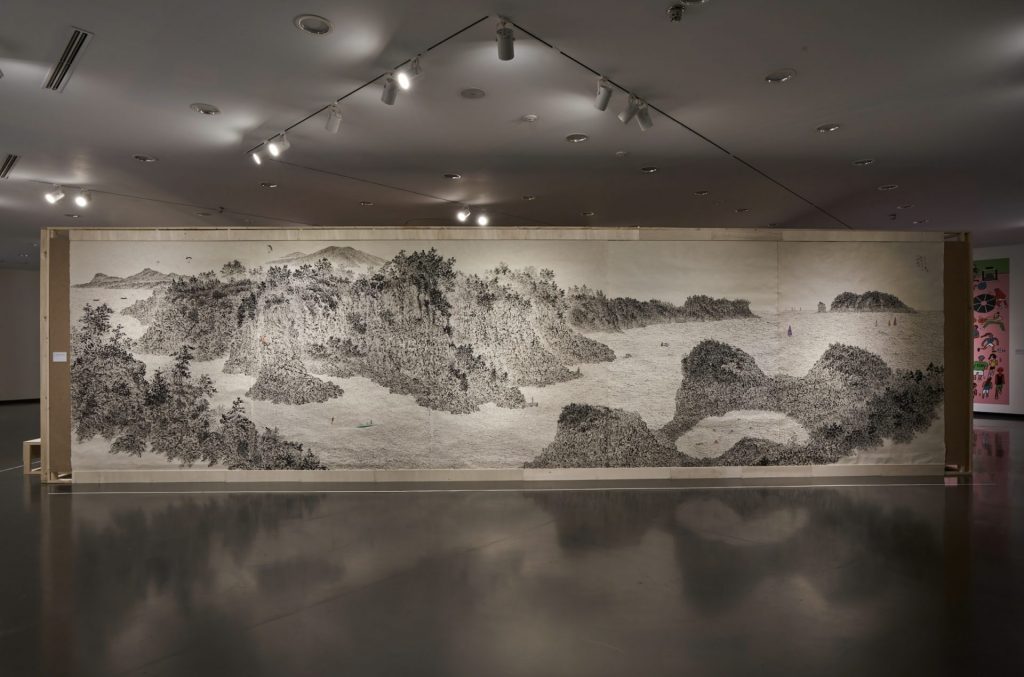 Opening on 1 April 2022, the SOMA Museum presents a major new exhibition MOM ∞ MAM: Möbius of body and mind. Curated by Stephanie Seungmin Kim, it is an ambitious study of creative and scientific developments in mind and body, in relation to sports and art. Located at the historic Seoul Olympic Park in Seoul, South Korea, SOMA Museum (Seoul Olympic Museum of Art) has been promoting art that embraces the body as the medium. The Soma Museum of Art announced that it had selected Stephanie Kim’s curatorial proposal as “it is a  project that presents the potential for expanding the notion of ‘sports art’ by showing the relationship between body and mind of sports and art in a variety of ways. The scope is both historical as well vast.”

MOM ∞ MAM goes further by exploring the mind-body connection, stressing how the mind and body are not two separate entities but ever-connected beings, with the boundary between inside and outside unknown, like a Möbius strip.

Told through an assembly of artworks and juxtaposition of historical references, MOM ∞ MAM will introduce some of the world’s most prominent and exciting artists to Korea for the first time.

Scale and time are vast and contiguous: Beginning with a reference to the Disk Thrower by Myron to the pivotal work by the ‘godmother of performance’, Marina Abramovic’s Rest Energy, the list is creative.

Stephanie Seungmin Kim, curator of the exhibition speaks of how ‘sports and art may seem like separate fields with few similarities, but share many parallels…Both artists and athletes constantly challenge the limits of their bodies and minds; once they reach the top, their achievements become part of the public realm; and both sectors are facing disruption through technology that challenges their core raisons d’être.’

While this exhibition illustrates the cultural and historical relationship between sports and art from multiple angles, it also attempts to go beyond the dichotomous thinking that separates the body, read as [Mom] in Korean, and mind, pronounced as [Ma:m].

Mom ∞ Mam is written as < 몸 ∞ 맘>, the symbol ‘∞’ symbolising infinity, and indeed looking similar to tracks where athletes compete. In Korean, they share one common consonant and the verb can be switched as if they were indeed closely connected.

While connecting two very different fields, sports and arts, Mom ∞ Mam will look at different iterations of body and mind in both fields from many angles. The exhibition ventures into the future to examine issues at stake: AI creating artworks, the highly technical development of bodies of professional sportsmen and the gamified world of today. In order to create meaningful juxtaposition, the newly commissioned artworks are exhibited alongside archives and representations from eleven institutions, including some from the National Gallery London, the British Museum, and the Minneapolis Institute of Art.

An Exhibition of Three Sections

The human body is the home of the sensory system and the interface between an individual and society. Part of the beauty of sport is maximising the use of the human body through training and one’s will. Art embraces the fullness of expression of the body while sport creates extraordinary expressions of the body and both have implications across cultures and history.

As we discover interesting intersections between sport and art, and by juxtaposing and assembling them, we hope to formulate a new interpretation of the two. Section One Mom Mom starts with the story of Myron’s Townley Diskobolos (Disk Thrower). Estimated to have been completed in 460–450 BC, it is the symbol of harmony, balance and athletic energy which had been transformed into a timeless artwork. Phidias’s Zeus of Olympia and the Doryphoros (Spear Bearer) of Polykleitos are other well-known Greek sculptures of classical antiquity, depicting solidly built, muscular, standing athletes, as seen from Alma-Tadema’s work showing the lasting effect of Greek antiquity even to the 19th century. This continues to the present, as Moritz Waldemeyer creates the Golden Ratio inspired by Doryphoros, using 3D printing and LED lights, reintroducing the spear that had been lost in history.

Contemporary artists are meant to shake off the mythologised or ritualised power and violence seen through sports games. Evi Kalogiropoulou’s work takes the Greek mythological figure Medusa into a 21st-century version of a cyborg. Taking a cue from Donna Haraway where her cyborg is an emancipatory figure blurring the separation between human and animal and human from the machine, Medusa is expressed as a running machine. Kalogiropoulou’s other work, The Beauty and the Innocent, questions the sports industry’s consumption of body and gender images with a provocative performance video.

Eugenio Ampudia shows professional athletes getting ready to jump, and reveals the photoshopped painting as their huddle. In his highly evocative work, Prado GP, cyclists pass the old masters and shine a light. The repetitive action of the athletes makes them look similar to soldiers. Cole Hanauer photographs boxers in clothes he has designed, challenging the traditional concepts associated with boxing.

Jia Chang challenges taboos by photographing the naked female body urinating, in Standing Up Peeing, and the works are chosen with reference to Doryphoros, which was considered as the ‘canon’, possessing ideal proportion and beauty.  Beechee Chang’s Look Inside is the first step of three steps of mind, where the audience is encouraged to look inside the box, to experience as if one were looking through one’s own mind.

The exhibition journeys into a literal marriage between art and sports with Lie Sang Bong’s five dresses for Olympic gold medalist Yuna Kim. Shown with the IOC recording of her Sochi Olympic performance, the dresses are each hand-modelled and  show how the dress is meant to express her weightless jump and flawless techniques.

The historical archives of winter Olympics show the long history of winter sports. Korea is naturally mountainous, making skiing a natural method of transport. The archives illustrate how the icy roads were travelled on better with slices – which look similar to skis – and some posters reveal the very first opening of ski resorts in Korea in the 1960s.

As extreme sports such as surfing are becoming very popular, the Miguel Nunes photo of the European bodyboarding champion Hugo Pinheiro reveals high tides that are indeed deadly to amateur surfers. This is juxtaposed with Oh Minsu’s monumental Korean ink painting that includes people enjoying sports within nature in the style of Korean traditional genre painting.

The theme of sports and water continues, and how sports were connected to the evolution of class and leisure is highlighted by James Harris’ Blue Lagoon Iceland and George Seurat’s Bathers at Asnières. The former is from the 21st century while the latter is from the 19th century. Seurat’s iconic painting was reproduced from the National Gallery with its consent and shows workers relaxing in the river Seine, and is meant to contain class criticism.

The pairing of old and new is changed to the pairing of East and West: Ji Hyun Yu’s illustration of Chariot was commissioned to refer to how the Olympic sports derived from Greek mythology and how the Olympics derived from serving the gods. Lee Sangyong’s chariot, on the other hand, is at odds with Korean tradition where people believed chariots were temporary shelters for bodies and souls in which to rest before they reached the next life.

Zero Lingual examines how the ‘Bang’ of the boundary space shapes our perception of inside and outside. By placing a tilted clumsy geometry ‘Bang (room)’ in the middle of the exhibition, Zero Lingual created a series of newly perceived ‘Bangs (rooms)’. The movement through each ‘Bang’ is a way of organising our experience of it, of orienting the body (MOM) and soul (MAM). Viewers’ perception of spatial enclosure goes beyond the physical boundary occupied by our understanding of notions, form, materiality, colours, and sound through artworks. This exhibition reflects questions about how we could perceive the nature of the visible body and the invisible mind.

Inside this ‘bang’ are the chariot and tomb paintings from Goguryeo, the ancient Korean Kingdom that stretched far into China and Russia. Hunting using archery was an important event that worked to train the army and had ceremonial usage. A lesser-known tomb painting of Ssireum – traditional Korean wrestling – is also inside, revealing the multicultural society that Goguryeo was.

The second part looks into technological advances that will change art and sport forever. Je Baak’ s Let’s Swim Together investigates the rhetorical question of what would happen if AI learned to swim. Indeed, AI is without a body, therefore AI does not physically swim but conceives visually how to swim, and this conversely leads us to question the world we live in with AI and the purpose of our body.

Moritz Waldemeyer revisits the core of Martial Arts, which is also a meditational practice, along with a fighting system. We encourage visitors to learn about the ‘art of the sword’, which is different to ‘the way of the sword’ and ‘the skill of the sword’. Visitors can use the swords to record the path of the sword, using cameras’ long-exposure technology.

Regarded as one of the most influential artists of the 20th and 21st centuries, Marina Abramović’s seminal work Rest Energy epitomises performance art that uses the body to the extreme but ironically is amplified by the heartbeats of Marina Abramović and Ulay. While they suspend their bodies in absolute trust of each other, the arrow is facing Abramović’s body, with Ulay holding a bow; the temporality of performance art can be translated to the work, using recording devices.

The exhibition also provokes questions about how the blockchain industry is driving certain artworks, gamified military actions and human-free news reportage are increasing, and art in augmented reality is exploring new frontiers. Chang Bee Chee’s second work shows both light and darkness within a box, entitled Look Back where the electronic circuits create an illusion of one’s past.

The last section is entitled BRAVO.

This third section in the exhibition shows that the most crucial aspects to be considered are humanism and collaboration. Still touching on sports and art, the last part shows how we inspire each other.

The first work one faces is Marina Abramović Institute’s Cleaning the House workshop. The space encourages visitors to leave their mobile phones and enter in quiet, to emphasise the importance of training and emptying the mind in order to create art. Paula Garcia’s RAW shows the collaboration of extremely challenging art projects, as various participants help Garcia prepare for a racing car crash. This ‘dangerous’ work needs an important collaborator – the other driver who is a stunt man. One sees him coming out of the car after a crash too. The viewer understands the work’s context by looking at the Noise Body work. Chang Bee Chee’s Look Beyond is at the end of the exhibition.

“I wanted to question the meaning of arts and sports from multiple angles. We have experienced the ultimate separation between bodies and ever closer networks during the pandemic. Advanced technology not only nurtures new mediums for art but also challenges the very nature of creating art. Through artists, I want to propose a new ecology that includes not just nature and humans, but all living and non-living things. This is pivotal through the expansion of sports, e-sports and sports in the metaverse.”

The Seoul Olympic Museum of Art is comprised of various facilities, such as Museum 1, an indoor exhibition space with a panoramic view of the Sculpture Park; and Museum 2, built in the underground space that connects the museum to the Sculpture Park. As one of the area’s most famous landmarks, the Seoul Olympic Museum of Art encourages visitors to commune with nature by creating a unique landscape that brings nature, humanity, art, and architecture together in perfect harmony.

As a centre connecting neighbouring cultural spaces, including the Peace Plaza and Mongchontoseong Fortress, the Seoul Olympic Museum of Art will also soon feature a walking trail that connects the natural elements of the surrounding facilities and links to different scenery.