Fashion from the Far East: Hanbok by Lee Rhee-Za

–    Supported by Korean Ministry of Culture & Tourism, Embassy of the Republic of Korea and Lee Rhee-za Hanbok

This Hanbok exhibition triumphantly showcases the beauty and sophistication of traditional Korean dress. The exhibition will reveal an unfamiliar facet of north-east Asian fashion (different from the Japanese Kimono and traditional Chinese dress) to disparate audiences, with the ideas and insights generated by the show benefiting not just fashion students, but general admirers of culture across the UK. It will enable a purposeful interchange of ideas and opinions, and imbue fashion lovers with new perspectives on traditional Korean dress. The exhibition will offer a unique opportunity to witness the peerless subtlety and grace of Hanbok, undoubtedly offering inspiration to all.

The exhibition is designed in accordance with the Han Style: Experience Korean Culture event at the Victoria & Albert Museum (4 November 2007), where Hanboks for 3, 6, and 9-year-olds and adults, alongside wedding attire, are ready for trials.

Though the Hanbok design is essentially a traditional one, and carries with it a rich cultural history, Lee Rhee-Za has transformed its status from ceremonial to fashion attire from the 1960s onwards, and still works with contemporary Hanbok designers, who receive valuable advice and new ideas from her, as they seek to innovate and set new directions for these distinctive clothes.

The exhibition will be divided into four sections, each highlighting a different aspect of Hanbok tradition and designs:

‘From Cradle to Grave’ – Five Designs

This section will demonstrate the importance of Hanbok designs in the context of significant dates and moments throughout one’s life. Years ago, the child mortality rate was high, and lucky babies who made it to 100 days old were adorned with Hanboks made with 100 patches stitched into one costume. A child’s first birthday is celebrated with a Hanbok design, where boys are given a prince’s costume to wear, and girls a princess’s dress. Children wear Hanbok costumes on significant annual holidays, such as New Year’s Day, Dano (on the fifth day of the fifth month of the lunar calendar), and Chuseok (Korea’s harvest festival). A wedding is commemorated with Hanbok designs that contain images of animals that live for a great deal of time, such as a turtle; this signifies the hope that marriages will be happy and enduring.  There are also special Hanbok clothes made for people who have passed away. Designs for all of these occasions will be shown at the exhibition.

These five key moments within one’s life are of great importance to Korean culture, and the Hanbok clothes are designed to mark each occasion with grace and respect. Unusually, the clothes will be displayed flat against the wall, which often intrigues Western observers.

This section will feature Hanbok designs made specifically for royalty and those of aristocratic standing from the 17th and 18th centuries. The costumes will illuminate the elegance and affluence of the Joseon court, in addition to showing the delicate and precise craftsmanship that went into producing clothes for those people considered to hold significant status and power within Korean society.  The clothes on show in this area will be five male Hanbok designs worn on five different occasions, and include costumes worn by civil servants and military officials for a king’s procession. The finery of these Hanbok designs provides clues to the Korean class structure of the time, in which public boundaries were strictly adhered to, and where people were acutely sensitive to societal restrictions and mores.  By viewing the clothes on show in this section, you will discover more about Korea’s fascinating history.

The Work of Lee Rhee-Za

This section will showcase some of Lee Rhee-Za’s finest Hanbok designs, spread across a career that began in the 1960s.  Her reputation rests on brilliant craftsmanship, excellent teaching, and attentiveness to ongoing developments in the fashion world.  She has, over recent decades, become a pioneering Hanbok designer, and those who witness her work are struck by the quality and distinctiveness that imbue every design she produces.

10 designs will be shown that are collaborations between Lee Rhee-Za and distinguished artists, using the skirt as a ‘canvas’, as well as four designs using ramie cloth instead of silk.

The final section of the exhibition will feature a range of accessories that can be worn to complement the beauty and sophistication of the Hanbok.  These accessories offer further insights regarding fashion culture in Korea. They are intended to show how, when combined with Hanbok clothes, the accessories enhance the beauty of Hanbok.

Everyone who witnesses the Hanbok designs is gripped by their subtlety and masterful craftsmanship. 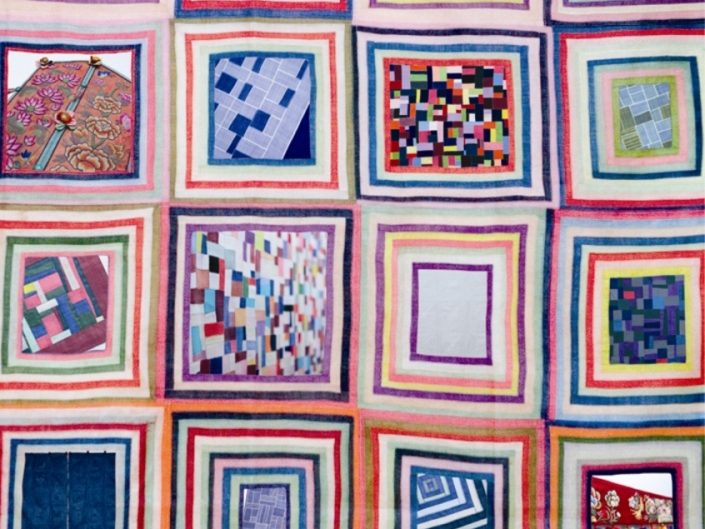 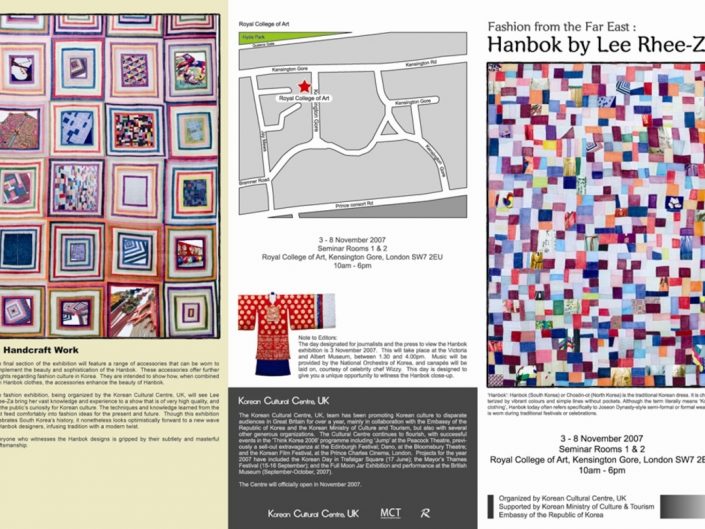 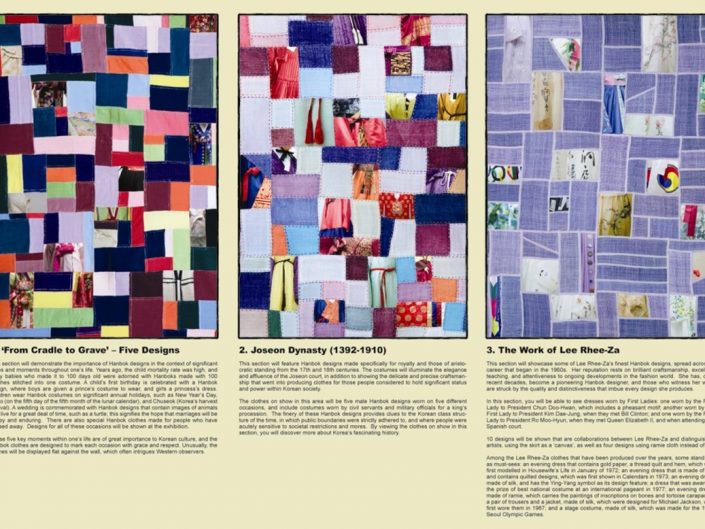 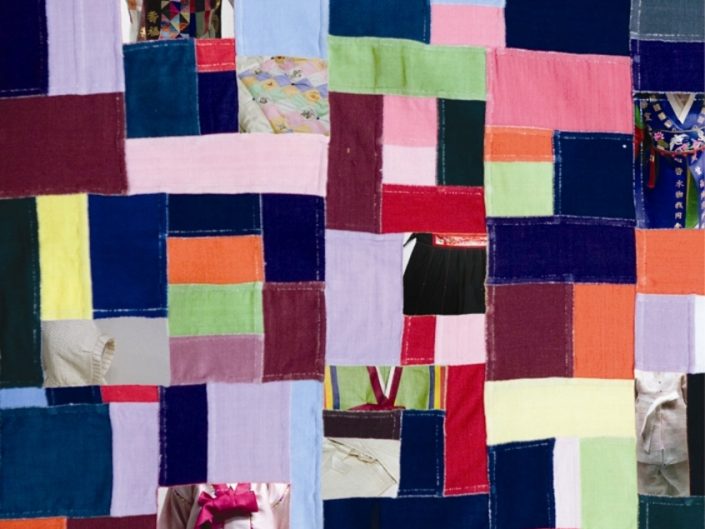 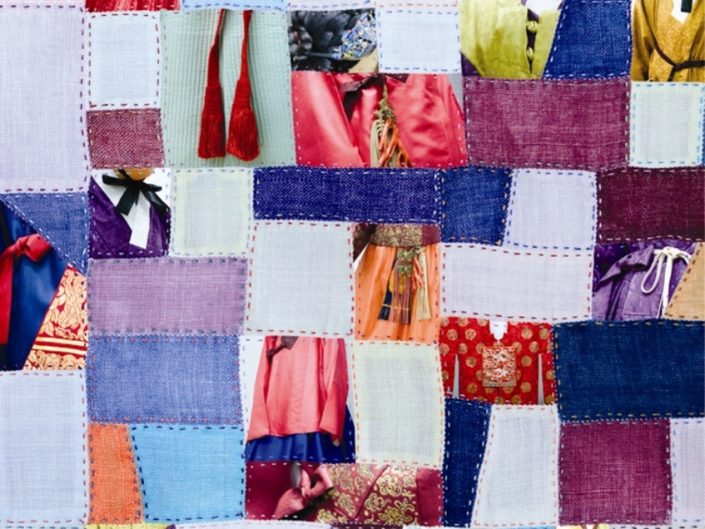 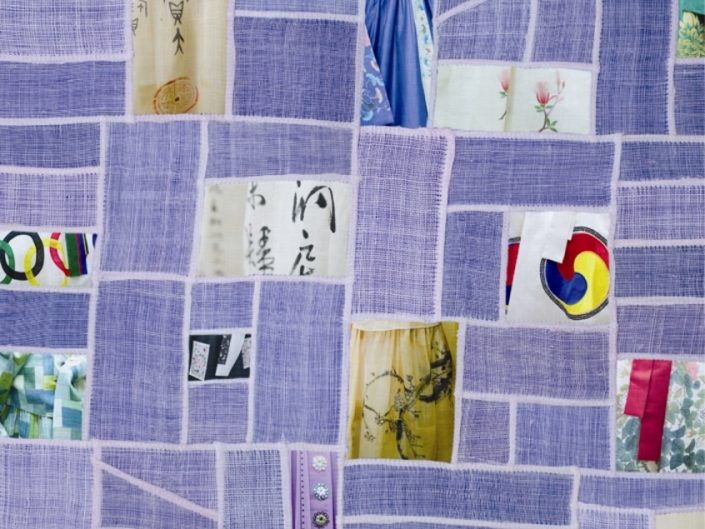 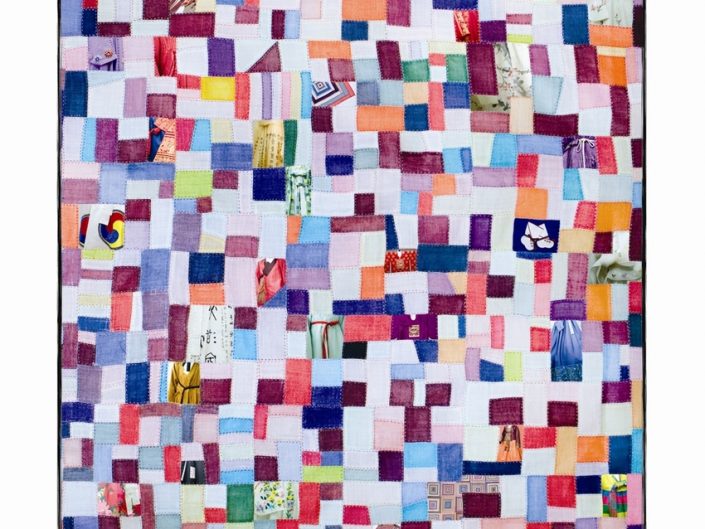 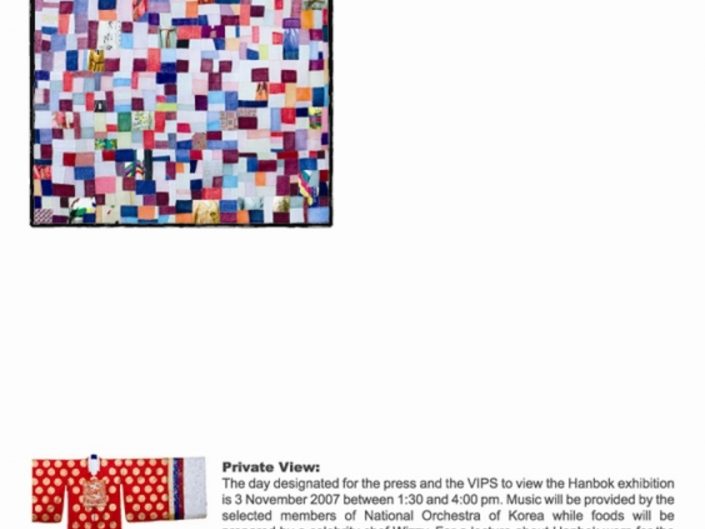