“Entry Forms” celebrates 14 artists’ investigations and their responses to their new environment. Whilst not a prescribed presentation, the exhibition offers a picture what is being produced today by a selection of artists from Korea who are living in Britain. The exhibition attempts to capture a sense of the diversity of works produced- all have responded to their new environment through varying guises, in different forms.  Whether it is by scribing their experiences or performing to us on a screen, a common interpretation of place carries through the exhibition, and guiding threads – issues of communication, the imaginary, investigation of form, and documentation- help us weave our way through their experiences.

Selected Artists and about the works

The issue of communication is highlighted in the work of Soonnam Lim. Her frustration with the failure of words is repeated throughout her writing. Due to the experiences of being misunderstood, she writes down her ideas, to keep, hold and control them in perplexing moments, as a way of negotiating potential misunderstanding. In keeping with her investigations, she sometimes highlights the mistakes on the other side of the paper.

In Bommsoon Lee’s work, she often seeks the audience’s sympathy for weaknesses or mistakes she might have made. Rather than anticipating judgment, she asks of them to be involved in the process. Interested in the failures of communication, through her investigations she is examining the gaps in our quest to reach absolute truth. In reality, she explores their potential for change. Lee’s work aims to allow the audiences to witness the transformation of ordinary subjects into an authentic experience.

The performative also comes through in Yun-Kyung Kim’s work. Her images document street performances taken in different areas of London. Throughout her series of photos she wears a British doll’s house in Georgian-style, her dress reflecting a romantic yet absurd set-up. To her, it is both her body invading another culture to adopt a new environment as well as becoming a mobile and temporary space, a nomadic transition.

Although Jihye Park’s link is closer to Zen philosophies than the classical fairy tale, the symbolism is certainly fairytale-like. She bases her eponymous film on a play, L’Oiseau bleu (1908) by Belgian Nobel Laureate Maurice Masterlinck. Adopting the plot (but not the morals), she focuses herself as a performer in princess-like costume in idyllic locations using props to tell allegorical, symbolic and personal narratives

Gee Song experiences the city of London which discovers both as an observer and an artist. Song feels that the idea of a holiday place, in other words a retreat from daily circumstances to a utopian and often natural place, can be seen in parallel to more mundane acts such as going to a Thai restaurant and decorating one’s house with exotic souvenirs. She sees both of these acts as emotional retreats. Through her work, she investigates the idea of the real and illusion, and examines the association between a holiday and a heterotopian place.

Heena Kim also works with images directly drawn from her subconscious and her childhood memories. As a child, as she often played alone, she developed an interest in living things she could interact with. In her work, she creates sculptural creatures, which are part human, and builds a world in which they can inhabit. Just as she enjoyed existing in her separate fantasy world as a child, she enjoys creating stories for her alternative world. Often the reality of her life is transposed to her work – the mutilated limbs of some creatures being a reflection of trauma.

Another aspect of fantasy, the idea of a miniature world is explored by Jeong Mun Hur. When she first arrived in the UK, Mun Hur was fascinated by the long lines of terraced houses. They reminded her of children’s wood block toys, and the landscape reminded her of a miniature fairytale world. Through her work, Mun Hur is interested in creating unfamiliar feelings through restructuring shapes. She creates simple yet perspectivally complex wall drawings, as well as wooden constructions. From architectural and industrial shapes and objects, she imagines a new world.

On the other hand, Youn Jeong Lee’s prints focus on cityscapes with buildings (not terraced houses) where, even though they are physically different, the many similar shaped buildings becomes pattern. She looks at building and windows; their contours are not necessarily considered, yet they produce a unique decorative space. She focuses on the idea of the cityscape inside space. She sees repetition in electric signs, traffics signals, which can be seen both on the streets and in a room.

Also interested in utopian constructions, Minho Kwon’s work responds to the world in which he lives. He feels that as an artist he is uniquely positioned to act as an interpreter and a translator of the layers of social complexities. Holding uneasy feelings towards neo-liberalism, he addresses these issues in his work. Through drawing, his preferred method of communication, he has worked with elements from architectural plans. These act as a metaphor, capable of revealing the internal structure of the subject matter as well as their surface.

In contrast, Jee Oh explores issues of commodity exchange through her work. GORI_Sa consists of four electronic plants called ‘GORI’. In the past these plants have been used to visualise various network data, like mobile phone data, SMS, or instant online messages. In this instance, GORI_Sa responds to movements in the South Korean Won exchange rate. GORI means ‘link’ in Korean language and ‘Sa’ has multiple meanings including the symbolic number ‘4’, ‘history’ and ‘death’.

On the other hand, Jun-Gu Noh demonstrates an awareness of the use of metaphor in his illustrations of train carriages. He calls his train carriages stages in which daily activities are carried out like a play. The train, like life moves forward. And so a tragi-comedy unfolds in front of our eyes in which, love, drama and death all have their place. Even private acts such as having sex, defecating, and bearing babies are represented. Jun-Gu has represented these acts with humour; he sees these as universal and transcending national barriers.

Also offering a record of social issues, Changwoo Ryu‘s series Threshold, is based around young adult’s lives in student halls of residence in south London. He has captured these young people living in Britain on the cusp of adulthood, as they mis-behave and experiment with recently discovered pleasures: alcohol, fashion, sex.

Illustration of time can be seen in Hyenmin Son. Her work moves between various media, through video, performance and installation. Her work attempts to explore the construction of homogenous space and imaginary experience in place and time. The video installation shows three very similar views of urban landscapes. It documents an unusual chance event, which appears like a mirage across the three screens showing the different locations. The work deals with the way in which we map our internal experience onto the landscape as if in a dream.

Finally the larger issue of looking at the world is examined by So Young Park. By making her subject look in the dark, or see with their eyes closed, she is questioning the location of the division point, or the eye-line, which determines light and darkness, and thus the traditional division between vision and imagination. Is seeing necessarily conditioned by light? Can darkness be seen as an object? Flatline is also an attempt to measure the horizon, to show how vision is only a partial representation of the space around us.

And so Park takes these issues further by representing her investigations in the form of photography, inscribing light on the image through her choice of aperture, depicting line through her angle of view.  Through these images we can ask ourselves where do the investigations of the artist, subject and viewer start and end? 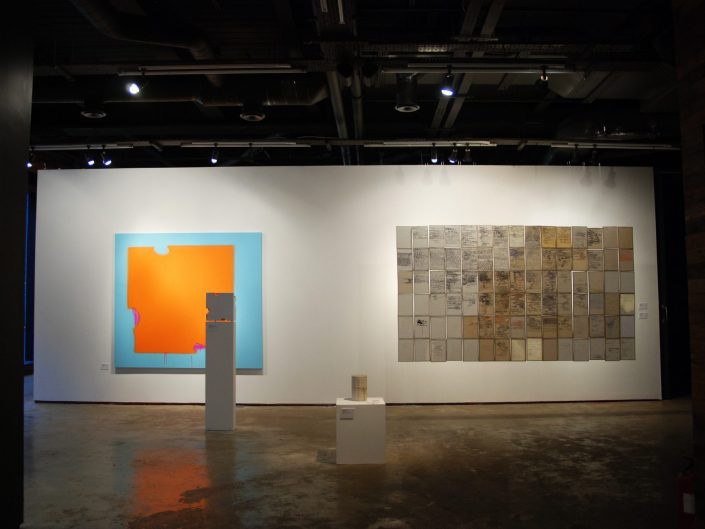